When I was first driving up to Brentwood Academy for the D2 Large school Pentathlon, I decided to stop at Dick's Sporting goods to buy a rain poncho.  Rain was the first thing on my mind coming into this State championships.  The heat, well, that was secondary at the moment.

As usual, the 100 Hurdle race starts out this event.  As the heats were announced, all six of them, I started thinking we are in for a very long day.  Seventeen athletes were lining up for the hurdles.  This new D2 school classification brought out one very big unknown for the multi-events... and that was how many would show up.  A lot.

Ok, I stepped off the topic for a second but I'm back!  A lot of times, the first event for this one day five event Pentathlon will dictate how the end of the day could turn out.  Getting into the top five in the hurdle race usually means you are getting off to a pretty good start.  Alayna Holbert, the senior from Brentwood Academy took charge in the sixth and last heat with her close win over Harpeth Hall's Annie Taylor.  Alayna ran a 15.22 and Annie ran a 15.40 to place these two over 100 points ahead of the pack at the start. 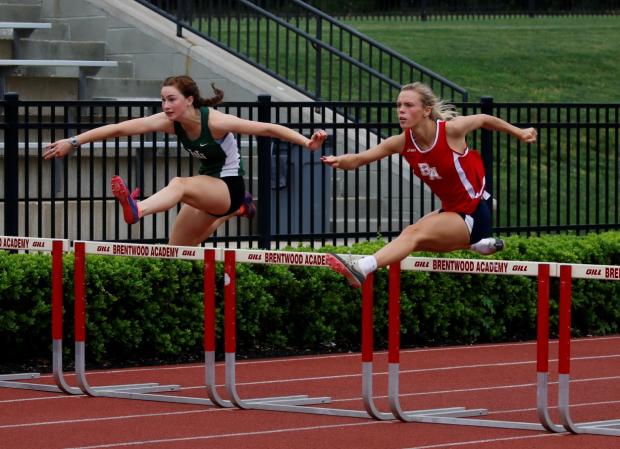 Once the rest period settled, the activity moved over to the high jump.  With seventeen athletes in competition and pending storms in the area, the BA folks went to two pits for the high jump event.  Not a bad idea, and if you have the room for two pits, then by all means take advantage of it.  Ok, there was a little congestion on one side of both of the pits, but overall, the jumpers worked into a good pattern and got to business.  It didn't happen often, but I looked up as two jumpers took off at exactly the same time and coincidentally they both took to the air at exactly the same time as well!  That looked cool!

This year the high jump seems to be a bottleneck across the state with not really anyone busting out a jump that is head over heals higher than the others.  Same thing happened here.  Four athletes cleared 5' and just couldn't get over the 5-2 mark.  Kaiya Wynn (Ensworth), Sydney Heifner (Harpeth Hall), Rachel Sullivan (Briarcrest) and Morgan Louderback (Brentwood Academy) all cleared that 5' mark (actually, its 4-11.75, but what the heck, editorial license here folks!).   With 644 points for the five-foot jump added to these girls totals early on, the numbers started putting the story together. 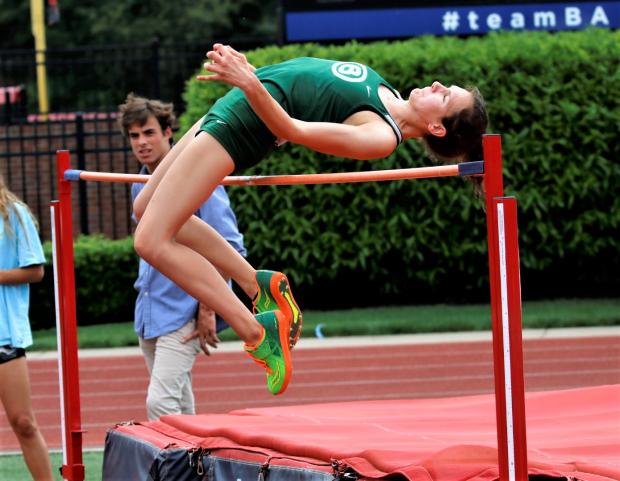 But it's a bit early in the day and the shot put was the next step for these athletes.  This event can give you some really good points and it also shakes up the results quite a bit.  It's a tough event for most Pentathletes and not one that most train extensively for, if at all.  Alex Swindle of BA was the top thrower this day with her huge toss of 39-7.0!  Just a hair shy of two feet in front of her teammate, Morgan Louderback whose 37-8.5 was impressive as well but only good for 2nd place in the shot this day.  The long and scenic walk to the shot-put area at the BA venue certainly turned out to be a pleasant walk back for these two teammates after those tosses!  And then there was Kaiya Wynn and Rachel Sullivan getting in a couple of good tosses at 30-11.25 and 30-0.75 to make everyone start to tally up where everyone was sitting with two events left. 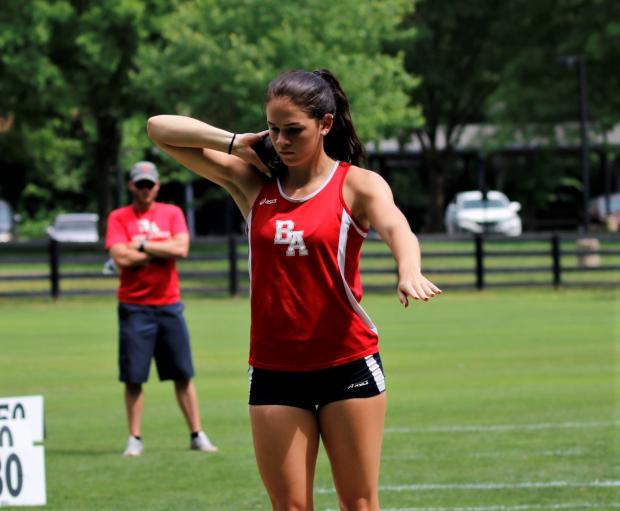 The long jump is one that a lot of people are familiar with and one that most think is just simply run and jump.  If it only was that easy to excel at this event.  Brentwood Academy did another tag team on this event with Morgan Louderback jumping 18-6.5 and Alayna Holbert just behind at 17-10.75 to get another one-two win for the BA team.   Those two were out in front by a lot and with a big pack of girls jumping right around the 15 or so foot mark, the standings were looking like a bit more packed that what a lot of the girls were hoping for at that point. 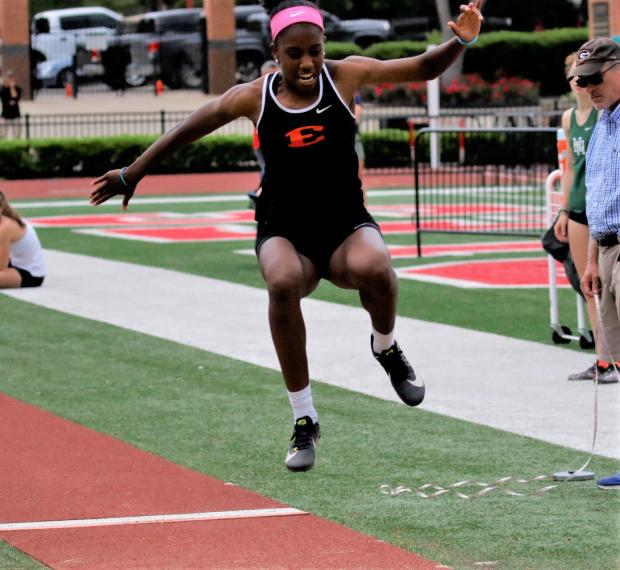 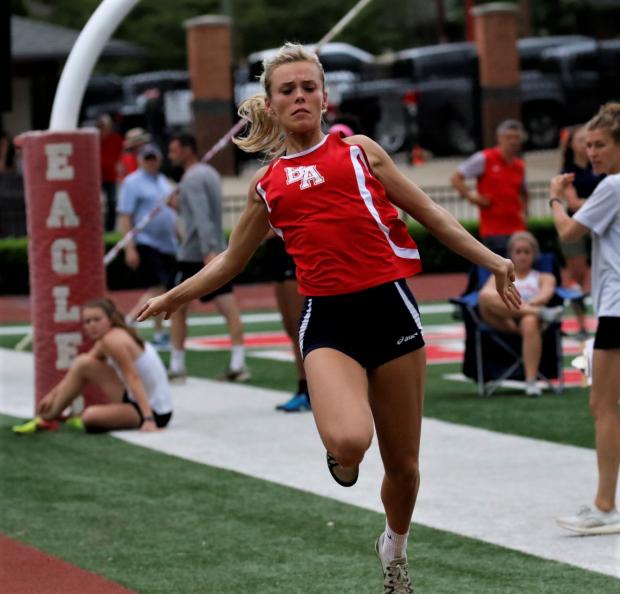 So up comes the 800... kind of warm and humid and a little light rain in the air... perfect 800 weather.  Well, maybe not perfect.  Ok, not even close but who needs to breathe, it's only two laps!  Two heats and the first heat ended up with Harpeth Hall's Sydney Heifner clocking a 2:33.51 to win that and get a solid 650 hard earned points.  The second heat was set to be a grueling race for sure with the top points all seeded in this race.  Kaiya Wynn of Ensworth took out fast with a first lap around 68 or so and as I was watching that, really thought that was going to be a crash and burn approach to the distance.  But that wasn't the case and she finished well ahead of the pack in 2:23.78 that secured her spot at the top of the podium for this multi-event.  Her teammate, Gianna Bullick was third in this 800 race in 2:37.05 and that put her in the third overall spot for the Pentathlon as well.  Harpeth Hall's Annie Taylor ran a 2:36.42 that also secured the same spot for her in the overall Pentathlon.  Annie earned 615 points for the 800 to give her a meet total of 2966.  Kaiya's total was 3148.

This just emphasizes how this multi-event is more of a race for points and not so much a race against another athlete.  An inch or two there, a couple seconds in the 800, a louder grunt in the shot put and the outcome changes.  So many times you hear coaches yell to finish strong... when it comes to the multi-events, that is pronounced with a very loud exclamation point!

See you on the Track, 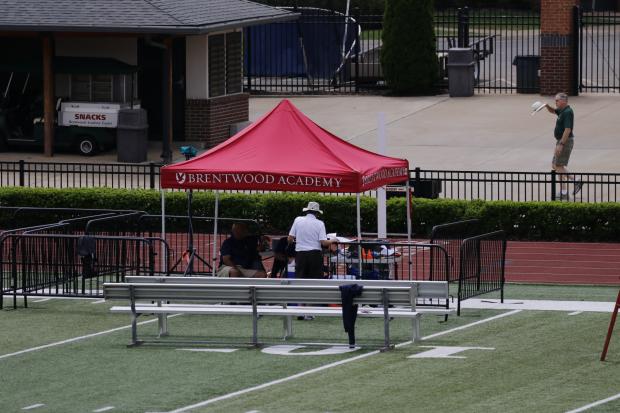