I've heard so many people say that the 800M run is slowly turning into a dash.  If you come out to the KYA TN Indoor State Championships this weekend you will have a chance to chime in on that thought.  With the top six guys all under the 1:55 mark and there are fourteen guys under 2:02!  Let's keep thinking this is a distance event, yea!  Top seed here is Scott Thompson of Brentwood and looks like is on track for the meet record.  Of course, so are all the guys in the top six - all come in with seeds better than the meet record.  My guess, we'll see a record here.

The Houston HS twins Colin and Keaton Jones (1:54.18 and 1:54.43 respectively) enter this meet with a slew of indoor meets this season.  Their personal bests are very close together with Colin getting a slight edge for the outdoor season.  Keaton has the edge in the cross-country event but Colin has it in the 1600!  So, who knows what's going to happen at the state meet - I'm sure both of them would like to come home with the win!

Then there's Kenton Bachmann with a 1:54.57 time for the indoor.  Kenton has run a 1:52.37 for the outdoor and that puts him heavily in the mix considering the Vanderbilt oval is a good sized 300M track.  Kenton also has a 52 second 40, so it's pretty clear he has some pretty impressive leg speed that makes him a factor in the last 200 of this race.  If you look at Wilson Central's Baylor Franklin's running resume, the 50.41 time really sands out for a distance runner.  That is blistering speed and just like Kenton, I'd be careful if he's on your tail with a lap to go.  And another one to keep a look out on would be Brentwood's Max Benson.  Max ran a 1:54 for his best outdoor last season and is only about half a second off that this indoor season.  I would imagine he's going to be a factor Sunday along with a lot of the other guys down this list of entries.  Like I said, the 800 is a sprint, isn't it!

The girls 800 features some pretty good athletes as well.  Division 2 state champion Meghan Underwood of Briarcrest Christian will test her legs in her only second race of the indoor season.  Never underestimate the talent of this senior.  If you remember, she's the athlete that ran the Vanderbilt indoor last season and the next day had to go to the hospital to get her appendix removed.  She can bust a gut, and she's got the scar to prove it!  Running a 2:16 last week at the UK Invitational is Hardin Valley's Ellie Bachmann.  That was Ellie's best time in the 800 and certainly is making a point to push Meghan in this race Sunday.

Hannah Burkhart (West HS) and Kensi Gray (Hardin Valley) are the other two girls entering this competition with sub 2:20 times.  Hannah has been pretty active this indoor season, running several races and showing improvement in almost every one.  That likely is going to give her the confidence she will need to stay with the leaders in this race.  Both Hannah and Kensi have some really strong 400 marks that could serve them well.  Kensi has a couple of races this indoor and like Hannah, has improved and is looking for a good race Sunday.  Like the boys, this should also be a fun race to watch!

The girl's mile is going to feature one of the best milers in the state in Beth Donnelly.  This Brentwood athlete has already run 4:56.58 at the UK Indoor on February 17th.  That's the best time in the state and a top twenty national mark.  Beth seems to be a one of those athletes that seems to just fit into the mile distance.  She's ok in the 800 (2:28) and her cross-country ability is decent (5K in 17:53).  Those marks across that range wouldn't really suggest a great miler is wedged between them.  But that's what Beth is, a really strong miler.  Her 1500 time she just ran at the Millrose Games of 4:41.23 boosted her to that mile time and really should heighten her confidence.

Although I would bet on Beth to win the mile, Skylar Boggard of Arlington may just be one to surprise a lot of people at this meet.  Skylar could be considered one of those experts at the distance events, she runs a lot of distance.  She tends to come across strong at the big meets.  Her fastest cross-country time came at the Foot Locker South Regional and her fastest 800 was at the Eastern Relays in Kentucky.   She also can bust out a great speed time at any time.  She ran a 60+ at the Briarcrest Saints Relays last year and so thinking this girl is just a distance runner might be deceptive.  I look for her to get a good mile time Sunday and if not at the top of the podium, then next to it for sure.

However, Meredith Helton of Brentwood Academy, is always ready to race.  Could she upend Beth?   Meredith is a two-time cross-country state champ for Division 2.  I've seen her race over the years and to use a cliché', if you look at what Webster's defines improvement, you're likely to see Meredith's name right there!  Every season this distance athlete improves her time, none probably better than her 3200 time of 10:42.20.  She has a 5:08 mile under her belt in the outdoor season last year and if anything, Meredith feeds off her good performances.  Meredith comes into this meet in her early phase of training but I believe once the gun goes off, her racing experience is going to kick in as the laps go by.

As mentioned, Beth Donnelly headlines the girls two mile with Niki Narayani (Webb School) being just a few seconds behind her.  As I mentioned earlier, Beth has some credentials coming into this indoor with the Milrose games on her resume, but Niki has been improving steadily over the years.   Niki doesn't have the blistering leg speed with times in the 800 just around the 2:30, but she has the talent to hold a strong speed over the longer distances.  With a 5:04 1600, 5:08 mile, and talent to break 11 in the 3200 and a 17:36 for the cross country distance, it is clear she excels when she has to hold the pace over a longer distance.  That could serve her well in this indoor meet - perfect weather and no wind. 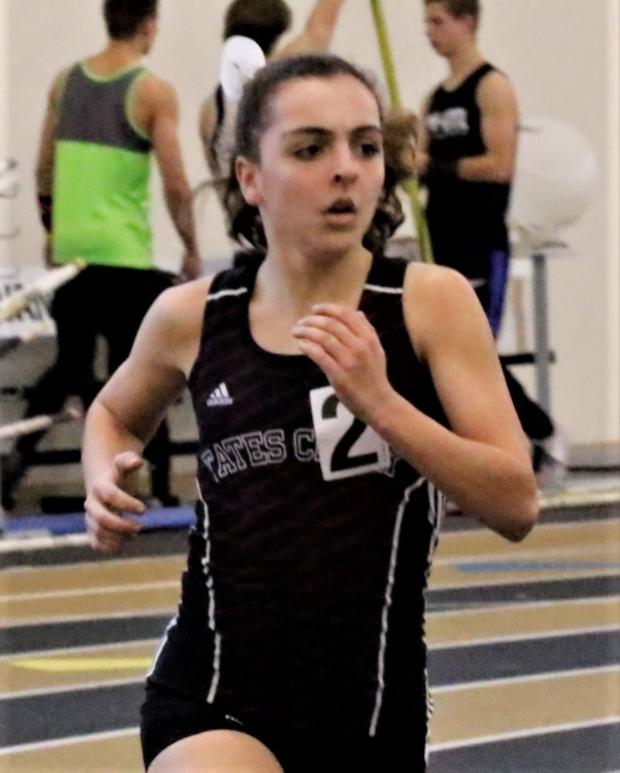 Gigi Maddox (Fred J. Page) comes just behind these two speedsters and could be a spoiler.  Having run a 2:20 in the 800 and a 1:01 in the 400, this leg speed could be a benefit for her on this 300M track.  I had a chance to watch her at the very grueling MSCCA cross country championships in Dixon last fall and saw how tough this girl can be.  Having run a 5:10 in the 1600 AND the Mile is quite the PR's.  I do believe we may see some fast times tomorrow and some indoor PR's to top it off. 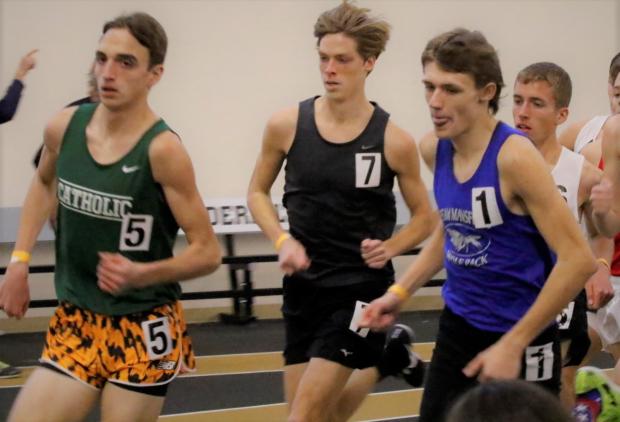 In the boys two mile, there are eight guys posting seeds that are under the 10-minute mark.  That range being from 9:21 to 9:56.   The top of the heap is not a surprise.  Titus Winders of course!  Titus posted his fastest indoor or outdoor time in the two mile at the Vanderbilt indoor a few weeks ago.  That 9:21.84 is a top 20 national performance and after watching him at that race, I think he can post an even faster time!  I believe this season is going to be a good one and this race Sunday might just be a good indicator of how good!  His brother, Silas is also entered in the two mile.  Silas ran at the Vanderbilt race but was under the weather and only ran a 10:15.87 but last week went up to Kentucky and made up that performance by a mile - 9:28.21.  These two Henry County athletes went 1 and 2 during the cross-country season in almost every single race.  It's clear that Silus is feeling better, wonder if it will happen again!

Canaan Anderson of Siegal is among the top seeds in this meet with his 9:27.41 he ran just behind Titus at the Vanderbilt meet early February.  He won the Dunamis Super meet in early February in a 4:32 time and looks to be ready to challenge the Winders brothers tomorrow.  Jake Renfree is another athlete that you do not want to ever count out in a race.  Be it in the beginning when he can take the lead or with him coming from behind.  He ran a sub 2 minute 800 in January and really hasn't run a lot of indoor meets this season, but that won't matter to Jake.  He will stay with the lead pack for sure and be ready for the challenge, he always is.

I'll have to ask at the race but a couple of weeks ago during the Vanderbilt indoor, I was watching the 2-mile race and wondering why I wasn't able to pick out Titus.  I was positive he was entered but I just couldn't see him.  A couple of laps went by and then I finally picked him out.  No, he wasn't boxed in.  He wasn't just in the wrong place for me to pick him out.  He didn't have the same hair style I was used to, so I didn't recognize him right away. I'm going to have to ask if the longer hair is helping - or hurting - his aerodynamics in the race!  Ok, probably not, but I just had to ask!

Good luck to everyone in this years TN State Indoor Championships!  Looking for the races and all the events.  And knowing this is another of the KYA meets, I'm sure Chris is going to be right on top of it and we'll see another well-run event!