There wasn't a big surprise with the D2 small school top finishers.  As expected on the girls side, Rebecca Story of Christian Academy of Knoxville took the top spot and Niki Narayani of Webb School of Knoxville finished as the runner up.   Rebecca took command of the race from the very beginning and reached the first turn with an already strong lead.  From that point, and something she hasn't had to do in most of her races this season, was look back as she cruised on to another win in this talented athletes high school career. 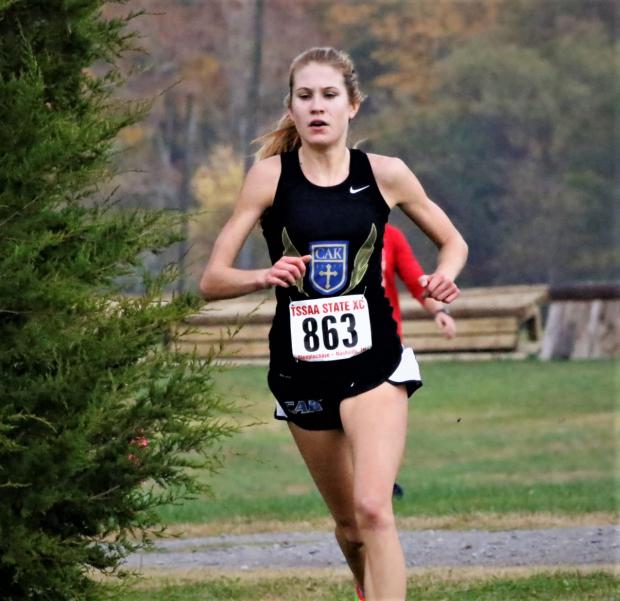 Webb School won the team division with a convincing 33 points.  Niki ran in the lead team spot with her overall runner up time of 18:46.87 and Lindsay Holliday got the second team spot with a 19:59.  That was Lindsay's best time on this course and in the state championships.   Third team spot for this strong Webb team came from Elizabeth Moore (21:16), fourth was by sophomore Kamryn Krishnan (21:47) and the final team spot was taken by Taylor Repine (21.59).  This is a young team with just a couple of seniors and considering their 6th and 7th runners came in all within the top 20, a team that will be around for quite some time. 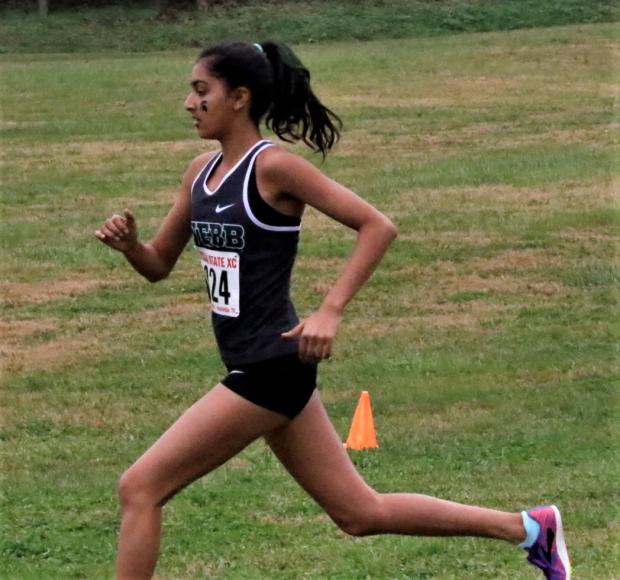 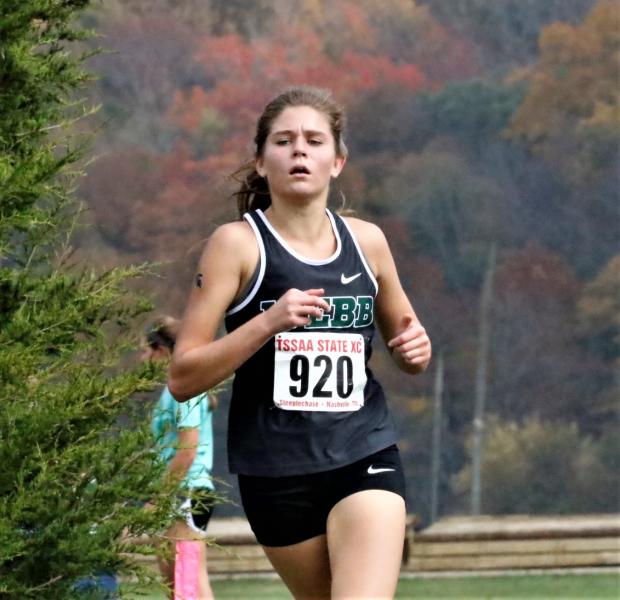 Coming in the runner up team position was University School of Nashville with 68 points that was ten ahead of Memphis areas St. George's team.  So that's East TN, Middle TN and West TN teams in the 1st, 2nd and 3rd overall spots at this meet, nicely spread out for sure.  If you look closely at that USN team, you see it is proof positive that a team that can work together in a race and surprise the competition.  Running off the lead of their top finisher, Ella Steinhilber, this team pulled out an amazing 1-5 split of 1:37.  That is more than twice as good as any other team score for this class.  With individual team spots of 9th place (Ella), 11th, 15, 16 and 17 that proved to be a very tightly packed group (Mia Owen, Zoe Light, Taila Barton, Shriya Karam and Stephani Franks). 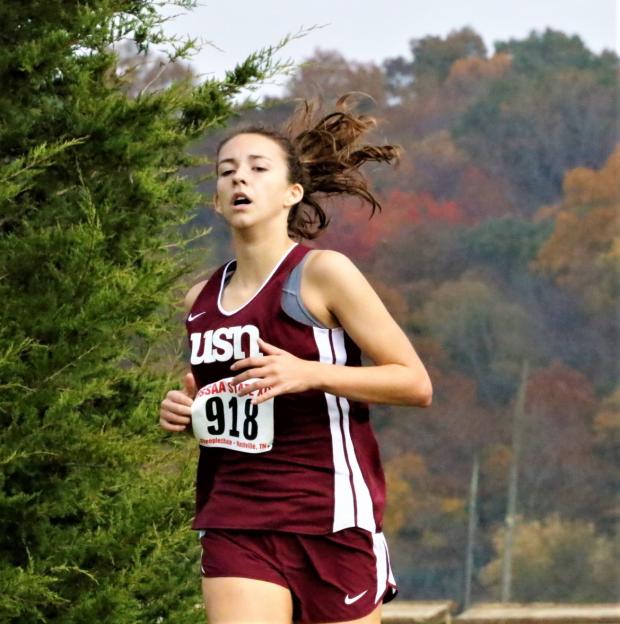 On the boys side for the small school D2 class, Webb School of Knoxville's Carter Coughlin did the same as Rebecca did for the girls.  Carter took off fast at the start and was clearly in front by the time the first turn came up.  From there though, Carter just get stretching out his lead.  With well over a minute and several seconds lead by the time the last hill was conquered, Carter just kept going strong.  His 15:47 proved to be the third fastest time across all divisions.  With Carter running basically by himself, well, that's one disciplined athlete for sure! 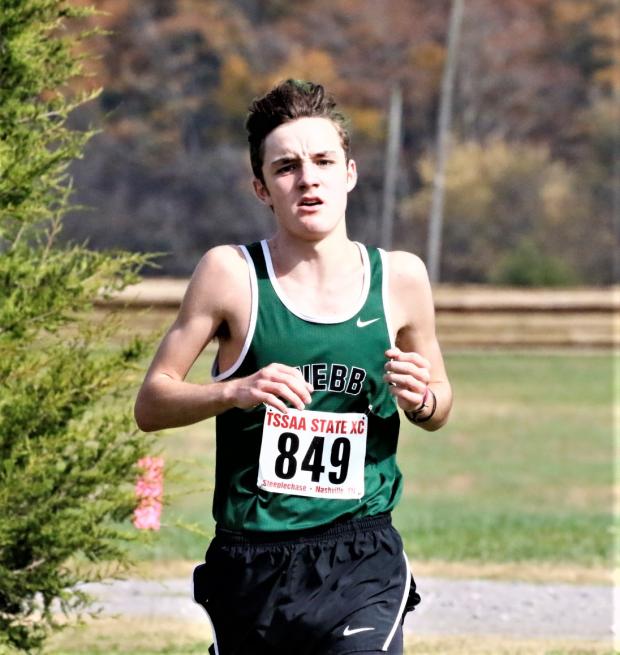 There was a fairly tight race for the runner up spot with Edimo Ninterestse of Chattanooga Christian School running 17:02.75 to get the spot just in front of Nick Sieders.  Nick ran 17:09.14 and as impressive as that was, consider that he's just a freshman for the University School of Nashville team. 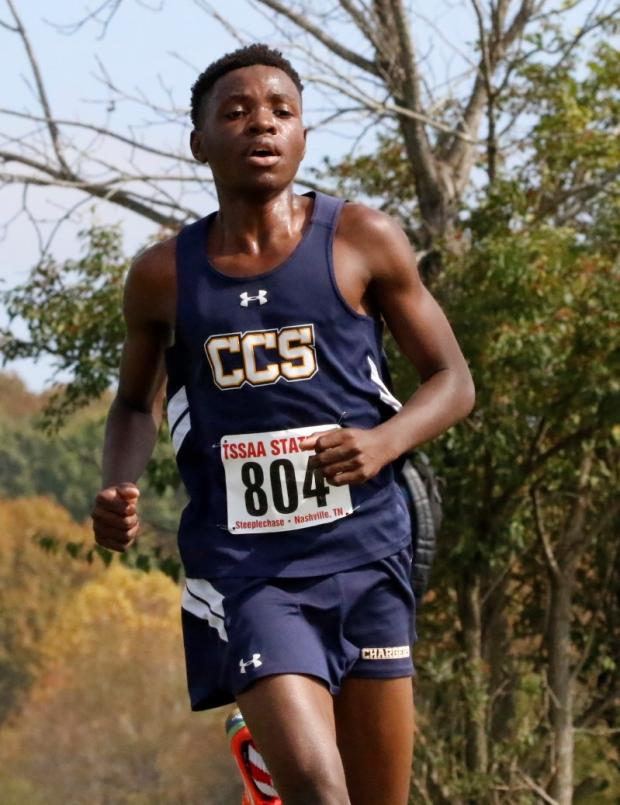 Nick was the lead runner for this USN team that pretty much matched the girls in the team race as they also came in 2nd for the team competition.   However, with 67 points getting them there, they might have the bragging rights over the girls.  Well... a one point bragging right, but still... 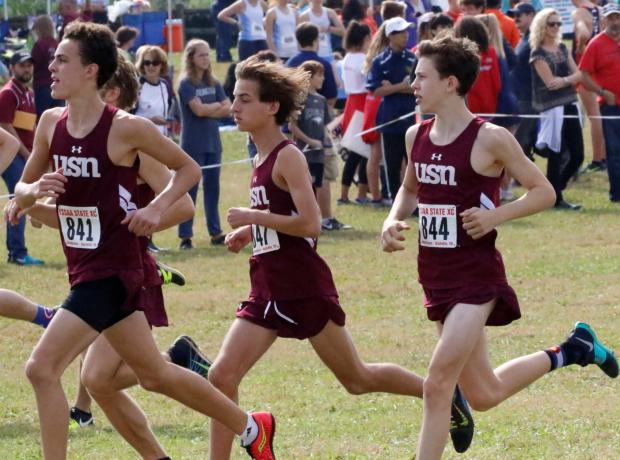 Chattanooga Christian took the team title by the slim margin of 62 points to USN's 67.  With Edimo setting the pace, this team was able to get an 18:10 average time that was just ten seconds ahead of USN's 18:20 average.   Bringing in the fifth spot for the team with a time of 18:59 was Senior Brandon Lowe.  That was also Brando's PR for the one season he has with this sport, not a bad season at all.  Just ahead, and in the fourth team spot was Chase Manton in 18:41.  Third and second spots were only about a second apart with Matthew Adams finishing in 18:05.09 and Joshua Richardson in 18:04.13.

See you on the Track and the grass...