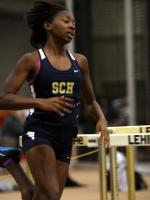 The Nation's Top 10 Girls Performances Of The Weekend I...
Brooklyn Broadwater ran the nation's fastest time of the weekend in the 400m hurdles; her 58.95 is a two-second PR...

Indoor States Preview: Girls' Sprints/Hurdles...
Here's what to watch out for in the sprints and hurdles at states this Sunday!...

PTXC Athletes of the Week for Week 5...
After a huge weekend, check out the stars who shined the brightest to earn our Athlete of the Week honors!...

Week 1 PTXC Outdoor Athletes of the Week...
Week 1 of the outdoor season is in the books! Check out the winners of the 1st Athlete of the Week awards!...

Girls NBIN Preview: Could 60H be a PA sweep? Strong con...
Several PA athletes have made the decision to extend their indoor season to one final weekend and compete at the 2015 New Balance Nationals Indoor Championships at the Armory in New York City....