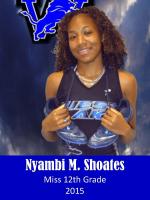 A Pride of Westlake Lions Sign Their NLI's to Compete i...
At least 8 athletes from the powerful Westlake program signed NLI's to continue competing in Track and Field on the next level....

Week Ending 2-22 GA HS Girls Top 20 Per Event...
It was a lean week in Georgia for Outdoor Track with the frigid Artic blast cancelling all meets Tues-Fri and the Big Orange Relays. Here were your top 20 Girls performances by event for last week....

Westlake Girls, Unfazed by DQ in 4x400 Prelims, Repeat ...
After a big miscue Friday evening, in which Westlake&#39;s great 4x400m &#39;A&#39; squad was DQ&#39;d for a few steps inside the lane 1 line, the Lions hung tough Saturday defending their 6A title pa...
Westlake Relays Meet Summary...
31 teams were scheduled to run at the 2014 Westlake Relays with many of them having top athletes. Nationally ranked sprinters and relays threw down against team powerhouses in an exciting day of runni...
Westlake Relays Preview...
The Westlake Relays is the place to be Saturday as 31 teams converge into South Atlanta to do battle in a variety of Relays, Field Events and showcase Individual events.  Ga.MileSplit will be onsite ...
Lions Showcase Lives Up to its Billing, Speed, Flying B...
. This meet did not disappoint as some athletes jumped right back to where they were last year. On the Girls side Westlake came into the meet wanting to prove their dominance last year will continue e...