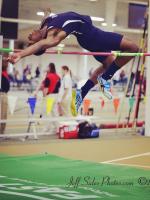 Border Clash, Part 1: NC Out to Dominate Taco Bell Classic
Alycia Springs and Khayla Dawson hold the top two seeds in both of the girls throws, just two of a host of NC athletes seeded well in the meet....

Boys Class of 2016 Rankings...
If you don't know this guy yet, you should - and you will! Kymani Dula (Southern Alamance) saw his indoor season end early, but he's back and putting up strong times....

Week 1 in Review...
The weather didn't stop everybody! Check out the top performances from all the meets that submitted results to us last week....

Class of 2016 Indoor Rankings: Boys Field Events...
Steve Fossi-Noue (Mallard Creek) is a jack of all trades, showing up in the rankings for three field events....

NC at VT: Virginia Tech Invite Preview...
There may not be much room to sit, or even stand, but that track in Blacksburg runs fast!...

Boys All-Classes Indoor Rankings...
We haven't heard from Jayon Woodard (Southeast Raleigh) in a while, but he still leads the 300 and 500 despite taking some time off from racing....

NC's Best Girls Teams Highlight Friday, Saturday AM Ses...
Cary's Layla White is back to try to duplicate the success she had on Friday night last year, and then Parkland is on the docket for Saturday morning....