Should you be in the vicinity of the CBHS Track this Saturday, you may consider stopping in parking yourself in the bleachers and be ready for some exciting racing.  Starting at 6pm, the HOKA Postal National Flagship event kicks off the evening for over 430 high school athletes!   For those cross country runners gearing up for the season, this is a great test to see where their fitness level measures up.  There will be several heats of the 3200M at this event and so you'll get to see some good competition throughout the night, for all levels of athletes.  Following the high school athletes will be the Ed Murphy Memphis Mile.  Folks, this isn't just your average mile, it's stacked with some of the top athletes from across the country.  It's going to be an elite packed event for both the men and women.  If you're any kind of fan of the sport, you do not want to miss these elites as they showcase their skills in the Ed Murphy Memphis Mile!

Jumping into the preview, the elites coming out are ones you will recognize.  And no, this isn't a throw-back event or anything like that, but if you watch Craig Engels you might just think that.  There's been a good share of jokes about his style... like "What's faster than a speeding mullet?"...  His mustache and mullet hair style may make him stand out, but this former Ole Miss standout and Nike Oregon Project athlete has the  speed on the track that really stands out!  You've seen him race and you know he's fast.  So come out and watch him in person as he takes on this elite field! 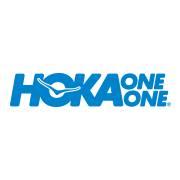 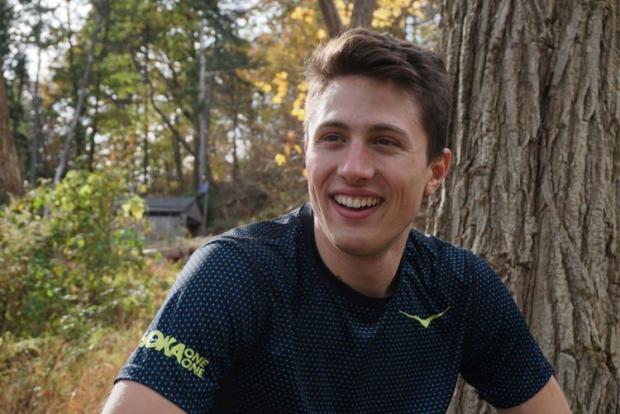 There are a few sub 4 milers coming in, including:

Jake Edwards who runs with Brooks comes here with a 3:58 mile personal best.  He's out of Columbus Ohio so it will be interesting to see how he handles the Memphis heat... I've been in Ohio and they have the humidity, so he could bust out a good one here. 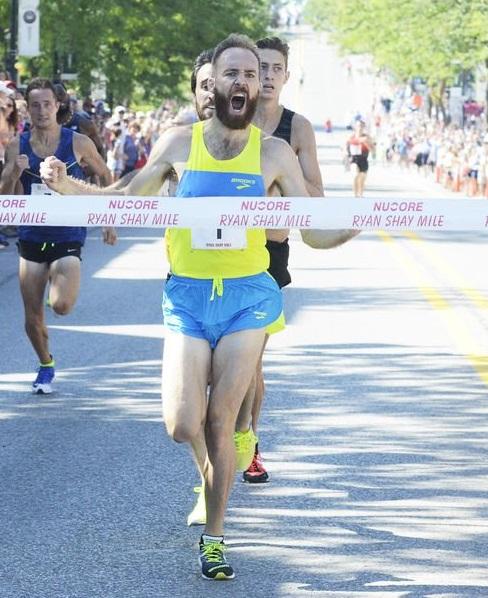 Joe Stilin of Zap Fitness Reebok also has a 3:58 mile best.  He garnered All American honors at both Princeton and Texas.   Like a lot of these elite runners, Joe also gives back by coaching athletes of all levels and keeps up a blog to share his running thoughts and ideas. 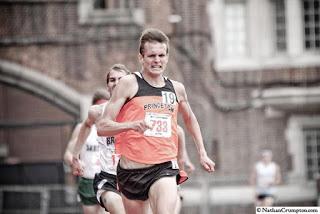 Eric Avila - HOKA ONE (since 2014) come here with a 3:56 mile mark that is fast!   The Ashland Oregon runner has some interesting facts on his bio.  According to his fun facts, he has a beer mile PR of 5:29.  He also holds dual citizenship with US and United Kingdom. 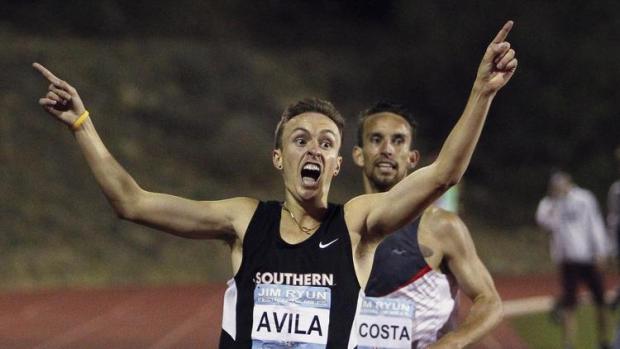 Craig Engels with the Nike Oregon Project comes to this meet having run a 3:57 mile personal best.  He joined Nike Oregon project this year, the 23-year-old is also formerly from Ole Miss, so he's almost family!   He has that distinctive mustache and mullet look that gets him some very interesting social media attention. 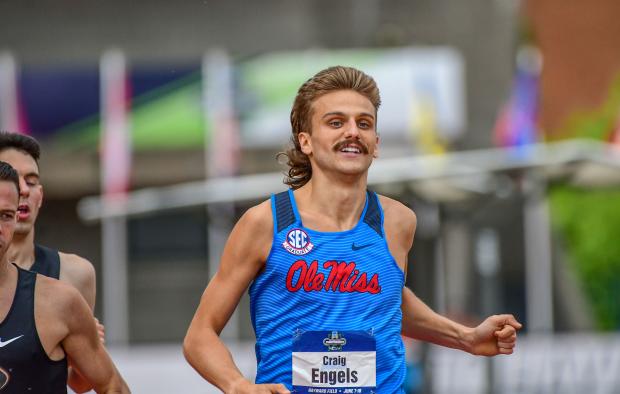 So a photo op with this athlete is one to cherish! 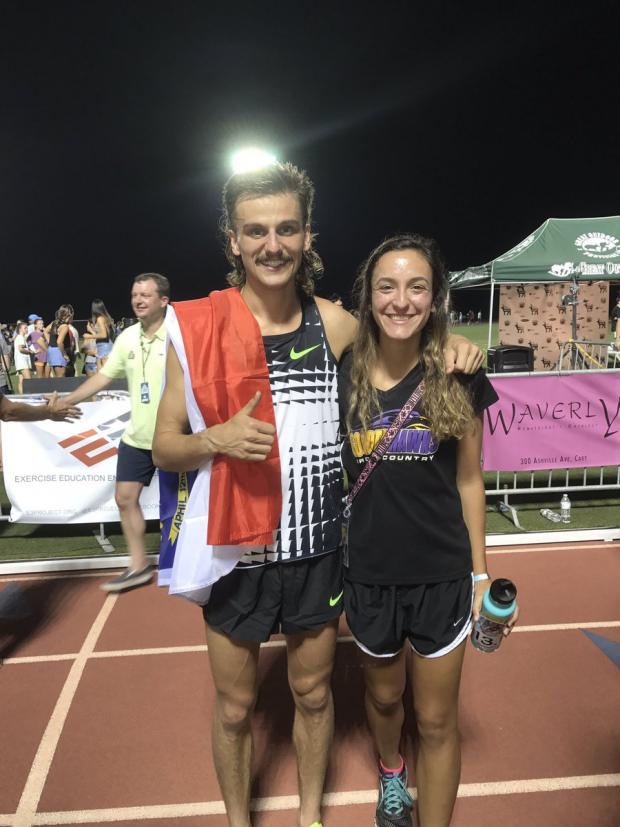 Travis Mahoney with HOKA is a steeplechase athlete with a 4:00 mile time.  He hails from Old Bridge New Jersey. 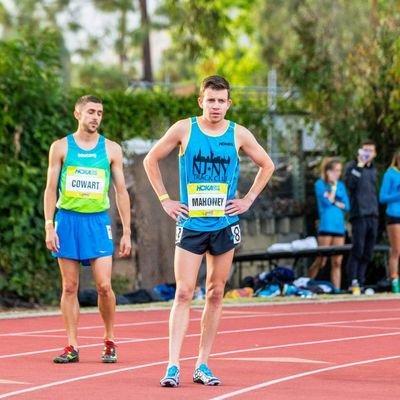 Ian Carter also ran at Ole Miss and comes in here looking to get a strong mile time as well.  He's a 14:24 5K runner and so you know he has the lungs to bust out a good one. 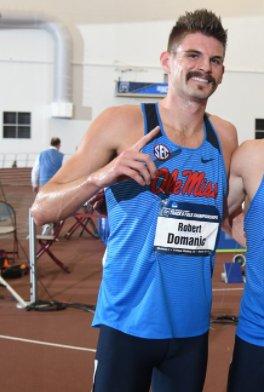 Brian Llamas of Roots running is from Iowa State University and has run a 4:01mile time.  According to his bio, he looks at a couple of quotes every day for inspiration.  One of those quotes is: "I already know what giving up feels like.  I want to see what happens if I don't" (Neila Ray).  Now that is inspirational! 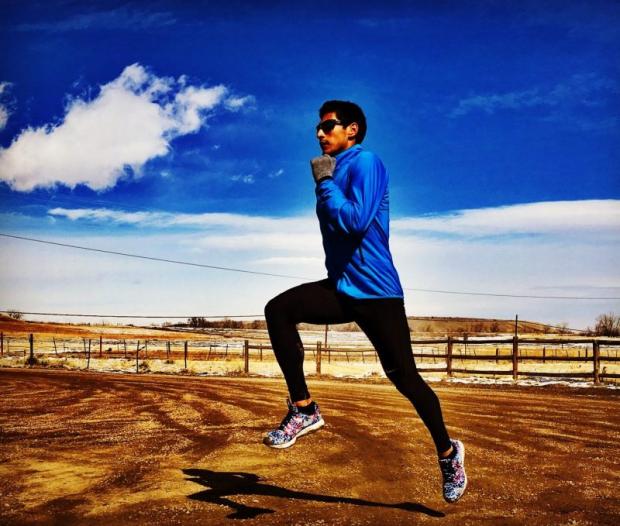 Andy Phillips is another Roots running athlete and having a 4:01 mile best just adds to the excitement we're going to see when these guys line up to race! 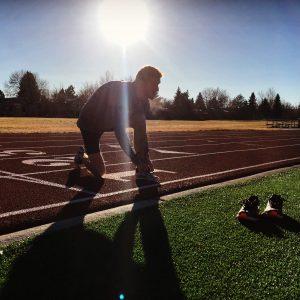 Jack Bolas of the New York/New Jersey Track Club has a 3:58 mile best and 3:53 road mile.  He ran at the University of Wisconsin-Madison.  And since he specializes in the mile, I'm betting we're in for a show Saturday for sure! 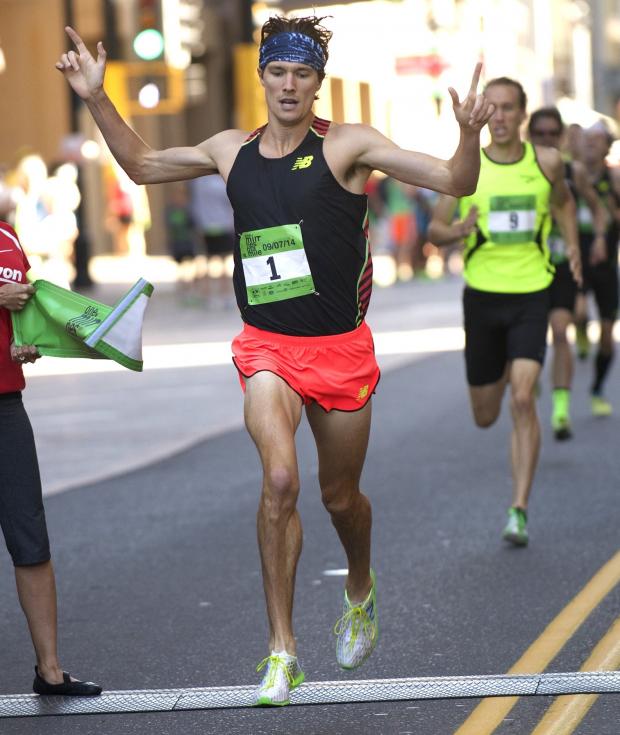 The Elite Women will be running the 1500M at the meet Saturday.  Starting off the show is the pacer, Alena Brooks.  Alena has a 2:02 800 best and runs unattached.    She's also Trinidad & Tobago 5 x national champion.  Ran her PR at the Ninove Memorial Geert Rasschaert (BEL) this past July so is in shape to pace these women to a fast finish. 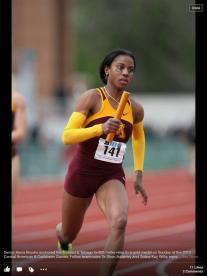 Kenyette Iyevbele - HOKA - 2:01 800M best.  She's a 2016 Olympic trials qualifier in 800 and 2x All-American.  Look for her to be wearing funky crew socks with colorful patterns.  She says that's one of her idiosyncrasy's... helps cover her ankles in those cold new York winters! 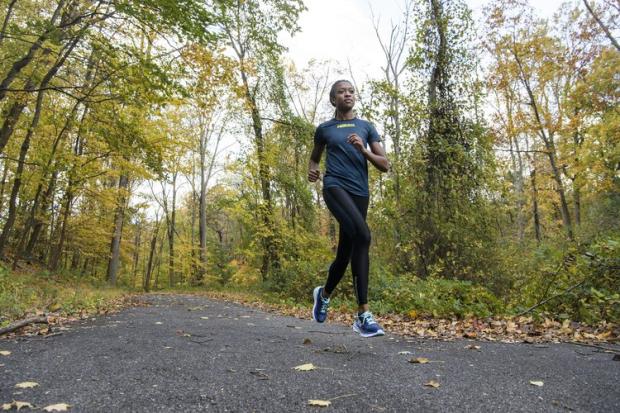 Sara Vaughn of Brooks is sometimes called Mamma Sara or something like that because she's a mother of three and still can blister the track like you've never seen.  Her 4:04 1500 personal best was just ran in the World Champs this summer.  That was her first World team, and believe me, that was a great accomplishment considering the talent she had to run up against.  The 31 year old mother of three stole the show when she made the team! 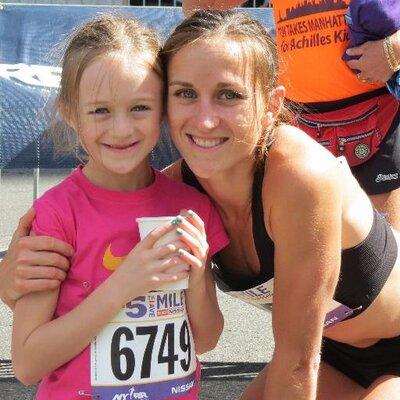 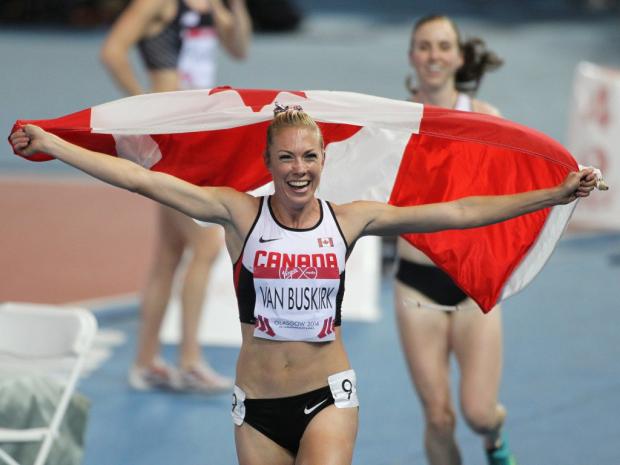 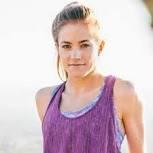 Kathryn Lazarchick from Mobile Alabama who ran at Wake Forest is coming here with her 4:20 1500 personal best. 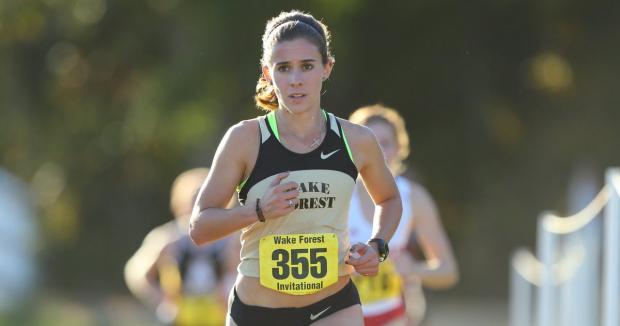 Margaret Connelly, another Roots running athlete is coming out to see if she can better her 4:55 mile time and keep up her strong running. 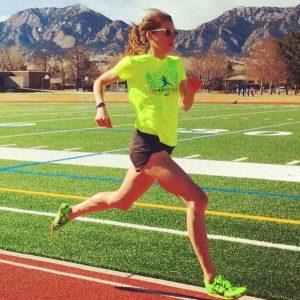 These elite races for both the men and the women is going to be one heck of a fun couple of races to watch!  There's talent galore for Saturday and it's exciting to know that we'll get to see it in person!

Over to the high school preview, we are also in for several really good races.  The high school athletes are all competing in the 3200M races.  Several heats for sure since there are a lot of athletes at this meet.

But since it's on the CBHS track, Zach Hammack (10:11.91) and Thomas Shallow (10:06) are going to be sure they handle their own turf well and start out their team with some fast finishes.  These guys can fly with Thomas almost under the 17 mark in the 5K and 2:05 for the 800.  Combine those two marks, and the fact that he's running on home turf, well, the 3200 might be a chance for him to shine.  Zach also has some pretty similar performances under his belt, but with his sub 17 5K and that 2:05 in the 800 as well, could combine to have him right near the front of the pack at this race.

The Bartlett team was really strong last season.  With Avery Wood leading the way with a 9:58 for the 3200 set at the Eastern Relays last track season, you know he's going to be gunning for the top spot Saturday.  His teammates are going to be pushing him as well, as they typically do run well together. Brandon Hill has a 10:06 3200, Jackson Williams a 10:03, and Travis Jones marking a 10:15 for the distance, they are probably going to be tightly packed and aiming for the front!

For the boys, I would be keeping a close eye on the three teams that include Father Ryan, Christian Brothers, and Bartlett.  I believe these are the strongest teams coming into this meet and will be a good indication of how they'll be handling the upcoming cross country meets too!

Looking quickly at the girl's side, Meghan Underwood (Briarcrest), Chloe Willis (White Station) and Nora Tillmanns (Hutchison) seem to be the favorites for the girls contest Saturday.

Meghan is coming off a very successful state champion track season and this really is her first real season getting into the XC field, so she could be a really good call to take the lead at this meet.  Chloe is a workhorse when it comes to the longer distances and I really believe she is going to come out strong this season and may just start that trend Saturday!  I believe Nora is a soccer player that steps on the track occasionally but when she does, she can burn it up pretty fast.  Watch for these three to step on the track with spikes tied tight and sights on a title here.

A few more girls to watch would include Dyer County's Kady Beth Leake having a 13 flat for the distance and Allison Newman of St. George who really hasn't run that much but seems to be better when the longer distances are in front of her.  Hannah Fisher, another really good Briarcrest athlete is coming out of a recovery from an injury last track season and so could really be hungry to do well.  She's at the 20 mark for the 5K and mid mark in the 1600, but if she gets hungry, could run this 3200 strong on Saturday.

There are several other athletes to watch and I am sure I left some off that can do well Saturday.  So if I did leave someone off, let's hope they get near the top and I can mention them on a post-race article!

Nick Dwyer of the Memphis Youth Athletics has made sure you are able to come out and watch this event - there is no cost to watch!  So make plans for this Saturday night August 26 starting at 6:00 pm CBHS Track Stadium with the Elites taking to the track around 9pm.