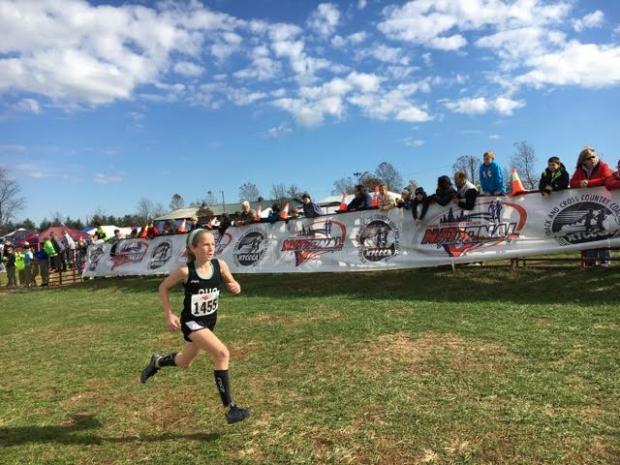 Nashville Youth Athletics has provided an arena for the youth (3rd though 8th grades) of the midstate area to pursue cross country and track for the last few years. They are steadily growing their developmental program, with over 700 runners participating in their regional championships (state qualifier) last October.  In addition to hosting a 6 meet cross country season, NYA coaches a competitive cross country team.  Coaches Brandon and Hollee Ally and Byron Brown work with a group of 40 or so runners from around the Nashville area 10 months of the year.  Those athlete shined brightly this past weekend at the Cross Country Coaches National Youth Championships at Masterson Station Park in Lexington, KY!

NYA sent a roster of 27 athletes to the National Championships, and 9 of them came back with serious hardware with 6 top 10 finishes!  At the top of that list is 10 year old Gabrielle Boulay.  Gabrielle has gone undefeated this season, including the KYA Tennessee Elementary School State Meet last October.  She set a new state record, blazing the Victor Ashe mile course in 5:35 as a 5th grader.  Last weekend, she followed that up winning the National Championship by 8 seconds, covering the 3,000 meter course at Masterson Station Park in 11:59.  Teammate Annie Buisson also finished in the top 10 with an 8th place finish in the 9 year old division of that same race, and teammate Mia Andrews was 43rd in the 10 year old division.  Following their effort in the 9-10 division, 10 year old Robert Corriea finished 5th with a time of 11:25 on the 3,000 meter course.

NYA now heads to the Footlocker South Championships in Charlotte, NC this Saturday.  I know they will represent the state of Tennessee very well!  NYA will take a break and hit the ground running again in January.  Their competitive team will begin meet action at the Vanderbilt High School Indoor Invitational (a meet that NYA actually helps to host).